A project by Vivek Singh, this restaurant aims to fuse Indian and British cuisine. The surroundings in this Kingly Street venue are not magnificently plush – almost as if they wanted to cut it from the same cloth as the venerable Brick Lane ruby, but make it just that bit more professional and class.

This restaurant is the latest incarnation of the ‘Cinnamon Empire’; an offshoot of the famous Cinnamon Club which has established a good following and the previous iteration of Cinnamon Kitchen.

strangely like a standard Indian menu, but with just that much more class.

The selection of starters were wide ranging and all looked very appetising with items such as the Fat Chilli with Paneer and Tamarind, Bhangra Beef Burger with three dips and Slow Braised Pork Belly with honey and Chilli glaze. It looked lie the highlights for the mains on offer surrounded Seared Duck breast in a Tamarind sauce, Vindaloo of Ox Cheek and the Kentish Rump of Lamb with a Rajasthani Corn sauce. 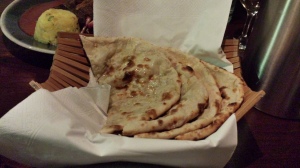 In the end we chose a serving of the Haleem spiced Mutton & Lentil Porridge & Saffron bun, and the delightfully named ‘Balls!’ which includes five different varieties of errr.. balls – South Indian spiced Crab cake, Game Mince with pickling spices, Quail egg wrapped with Bengali Beetroot and vegetable, Chickpea Batter fried Masala Potatoes and finally a Lucknow style mince vegetable kebab. Now no one is expected to remember a single jot of what was written there, but seriously you do have to get them if eating here. The combination of warm flavours, tingling spices and mixed pungency were brilliant all around. With some selective dips also provided the whole dish is a delight. The spiced mutton on the lentil porridge was also superb. A delicious blend of zing all around.

The mains arrived (Spice crusted Hake in a Colombo curry sauce, and the Tandoori King Prawns in a Coconut Malai sauce – also selecting the sides of Peshwari Naan and the 24 hour cooked black Lentils) with appropriately enticing aromas. Full of a lovely tang all the dishes had a lovely touch of class and attention to detail. Every last morsel finished off with desire.

We had to see how they could create a fusion of Britain and India with desserts so the Mango and Cardoman Brulee and Chocolate and Cumin tart were next – again not a hint of disappointment, just fascinating and pleasing textures.

What is created are some truly original looking and wonderful tasting dishes that are definitely worthy of note. Considering the level it is achieves the prices are not too eye watering either, but frankly with the imagination on show from the chef here, it is really worth a visit.