On signs lining the railings of the dock on a seeming public right of way, rod owners are reminded ‘Private property – fishing is not permitted here’. Why anyone would want to fish in one of London’s former docks, with behemoth-glass-monoliths towering above them is a question purely for fisherman.

As one of the world’s bastions of corporate capitalism has grown up over the last 25 years, it has been populated by not just worried landowners fearing piscator’s leaving their tackle lying-about, but also given rise to some darned good watering-holes and places to feed.

Be under no illusion though, as this is a haven for employees of Barclays, Citibank and Reuters the prices for a steak here might make some baulk and run a mile. As a lover of steak I had visited the original Hawksmoor (Spitalfields) safely taking the title of the ‘best steak in town’ – Service, quality and the meal itself creating a convincing argument. However Goodman’s reputation isn’t too shabby either; so off we trotted.

Arriving a little early and were greeted warmly by the staff. We headed to the bar for a bit and had a glass of wine whilst looking over the menu. The options on show are what you’d expect from a top-end steakhouse, plenty of options of cuts and sides with well thought through wines that match the meats.

If you’re not quite satisfied with the standard menu then fear not – Goodman has such a wide range of cuts, sources of beef and general pride in their options, for first-timers they bring a blackboard along and a plate of example cuts with a detailed run through on their various pluses and minuses.

The personal touch here is fantastic and does get the anticipation notched up to a high level. If you want to take it up even more take a walk to the back of the restaurant and view their whole spread of cuts on display, slowly being aged in a controlled atmosphere behind a nice glass wall. The Beef from USDA America, Ireland, Scotland and other parts of Britain we’re explained all have different benefits because of what they’re fed at various junctures before their unceremonious end.

To kick of proceedings we ordered the pan fried Foie gras, Roasted Fig, oyster Mushroom with Truffle Honey for one of us, and the other dish was ‘thinly sliced yellow fin Tuna, Avocado, crispy Shallots and Shiso dressing.

The foie gras was expectedly rich with a melt in the mouth quality; well grilled with bags of flavour complimented well with the extras – whilst Tuna was superb – sliced raw tuna sashimi style with the dressing expertly mixing with the yellow fin.

But obviously the dishes that merely whet your appetites just delay the inevitable beef course. The sheer volume of portions, types of cut and sourced animal is vast but all well laid out on the blackboard they deposit next to your table. Most purchases will surround how flush you’re feeling on the day – they range from £30 for a T-Bone of Black Angus Yorkshire all the way up to a £137 Bone in Ribeye Wagyu… hmmm 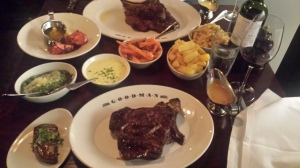 Our choices might make some wince, but whilst you’re sitting there supping some lovely wine being romanced by plates of large raw beef cuts orchestrated by excellent waitresses (special thanks to Hella), it is bloody hard to make informed decisions. I went for a 750g (1lb 10oz) O’Shea Irish bone in rib-eye, with my learned companion going for a rather gargantuan 1.1kg (2lb 6.8oz) Belted Galloway rib-eye. Now there is a more than fair train-of-thought that these kind of offerings can be said to be obscene given so many extreme hungers in the world, and there is little I can do to argue this point frankly…. 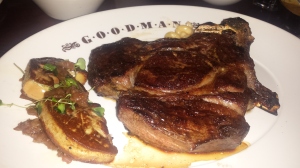 We were coached that the more grass fed Scottish beef was much fuller in flavour than the sweeter USDA, with the Irish somewhere in the middle – suffice it to say it mattered little, as these steaks aged up to 50 days tasted ridiculous. The vast array of sides available such as the Lobster Mac and Cheese, creamy mash and creamy Spinach were all equally leaning towards the rich and indulgent end of the scale.

As far as I can fathom, the main issue with steak-houses with standards as high as these is that A) it seriously increases your chances of a sudden coronary B) seriously dents your wallet and C) also leaves you at a quandary – when you eat your ‘average’ high street steak at a pub, or even a relatively good one from a half decent butcher it leaves you wanting far more.. the Goodman’s and Hawksmoors of this world have a lot to answer for.