Nestling snugly near the British Museum lies this small sliver of the Land of the Rising Sun, specialising in Japanese Okonomiyaki cooking. 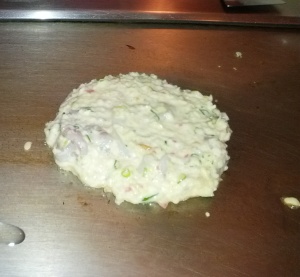 I guess it’s best to think of this cooking as a kind of pizza or a glorified savoury pancake. There are many different well established fillings or toppings that reflect different cities and areas in Japan.

The word Okonomiyaki splits down literally into two words meaning “what you want” (Okonomi) and “cooked” (yaki) and is predominantly made up of Japanese batter, with eggs, yam and shredded cabbage. It is then mixed with other ingredients but the original Okonomiyaki from the Osaka Kansai region contains green onion, thin pork belly, octopus, shrimp, vegetables and cheese. It is then topped off with a thick Worcester-like sauce or Mayonnaise.

Lots of variations of the dish have been made over time, and you can add or subtract toppings and fillings to your heart’s content, giving it that pizza like feeling. Once cooked the Okonomiyaki’s are roughly 6-9 inches across, and dependent on what version you go for can be quite thin or nearly two inches thick.

Our meal started off with Edamame, Agedashi Tofu and then some Gyoza dumplings that were griddled right in front of us, all of which were really delicious. For the Okonomiyaki themselves we went for the Tokyo Mix and the London Mix, whilst imagining the London mix isn’t something you’d quite find in the deepest depths of Japan, the filling of bacon, pork, salmon and cheese sounded too good to turn down. 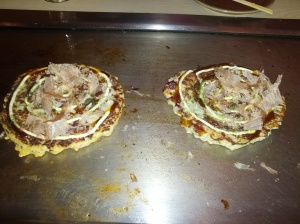 hand mixed the batter, added the choice extras and poured onto the griddle flipping once and finally covering with sauces – all of which is a really nice bit of theatre to add to the experience. When the eating of the Okonomiyaki finally came they were without doubt surprisingly filling, and very, very tasty indeed.

For the restaurant itself the atmosphere isn’t that great to be honest, and besides the Japanese pictures hanging off the walls, it could just be any other restaurants surroundings.

But the food and service are definitely where it is at.

That minor point aside, it was a new experience for me and if you want a place that is just that bit different, especially with regards to Japanese cuisine then it is highly recommended.

I will be returning.

One response to “Abeno – Pancakes without maple syrup”