Near the newly designated landmark regeneration area of Nine Elms sits the Lost Angel & Gaslight Grill on Battersea Park Road.  The surrounding area doesn’t exactly befit the quality of this bar, but it’s what inside that counts. The Lost Angel offers the comfortable surroundings of the bar, restaurant and the excellent back garden area – ideal for summer. 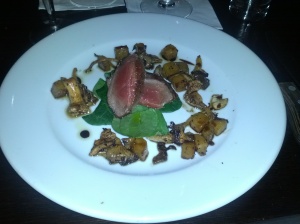 As you’d expect from a bar that is aiming for quality we were greeted by an amiable waiter who led us to a table and walked us through the key features of the menu before tempting us with a pre-dinner cocktail at only £5 per drink (Happy hour rate). Both were expertly crafted and superbly tasty. It’s also worth mentioning the rest of the drinks menu is well rounded, with Ales, Ciders and a wide range of wines available.

The Gaslight grill menu itself is divided into two discernible parts, with the first page taken purely by the starters & mains and the second, which is largely taken up by a vast array of sauces to accompany any steak selection. There must be about 20 of them on offer, ranging from the classic peppercorns, or Béarnaise through to booze heavy ones involving rum and stout. The starters on offer have a nice range of fresh rustic and seafood selections – We went for the ‘Pan-fried Wood-Pigeon breast, hazelnuts, golden beetroot, foraged mushrooms with truffle oil’ & the ‘Baked Crab served in its shell with a parsley and parmesan crust’.

Whilst waiting for our starters we heard a band start to play in the front bar area – an unexpected bonus with the waiter telling us “every Thursday is band night”. So with the cool rhythm and blues atmosphere set, the starters arriving promptly, the red and white wines by the glass plus the food smelling scrumptious we dove straight in. The pigeon was properly cooked, rare, lean, beautifully gamey, and was well complemented by its accompaniments.  The subtle crab meat was slightly overpowered by the parmesan but nonetheless enjoyable and every morsel was devoured.

For the mains we had to hit the steak menu given the sauces on offer, so a rare 350g Rump Steak with Bacon Jus, Smoky Bowmore whiskey, and Cep and Cognac sauces was chosen, plus a side of baby spinach and shallots. Now, I wasn’t being greedy here; you do in fact get three sauces included with any steak selection, so unless you have a serious objection to sauce then you’ll definitely be ‘sauce-happy’.  The other main chosen was a recommendation from our waiter, with the newly added Orange and pink pepper marinated Halibut on Jerusalem Artichoke and purple sprouting  Broccoli.

As the band knocked out the tunes, the mains arrived in style. The steak was perfectly rare, and each sauce did its job but the Bowmore whiskey  was a firm favourite  The real triumph though was the marinaded Halibut. Succulent white fish, flaking off and infused with the orange and pepper. Not a combination of flavours you’d ordinarily think would go together but in practise a well thought through dish. The broccoli was tasty, and the Jerusalem artichokes were delicious I’m told (I didn’t get a look in as they went so quickly).

Moving onto the desserts, we were admirably full so just went for a shared dessert – nevertheless we went for a slice of richness going for the Sticky Toffee pudding – rich it was but damn it was good. Sweet, tantalisingly moreish and ‘plate-lick-able’.

To say it is pub, or even gastro pub fair is doing it a massive injustice; the food is so enjoyable all around. Some pub / bars try to do too many things; but the Lost Angel manages to juggle a fine bar knocking out great cocktails, plus house the Gaslight Grill in its four walls producing a high standard  of culinary flair at a reasonable cost. It’s well worth a visit, especially on Thursdays. I haven’t been to try the Roasts yet but have heard good things and so that’s next on the list in the near future.

One response to “Lost Angel and Gaslight Grill, Battersea”