Straight out of the Hollywood movies Gonpachi is a Japanese Izakaya. Izakaya’s were most likely born out of Sake shops where people were allowed to drink on site. All major types of Japanese cuisine are served in these establishments, and although a place that sounds it is a jack-of-all-trades might not be any good, they generally are a great place to have some food and a drink. 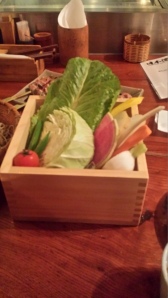 Gonpachi was made famous for a fight scene in which Uma Thurman fights off 80 Swordsman. Although not actually filmed there the set was modeled on this restaurant.

Very busy as we walked in, it is recommended to book in advance (We used our hotel reception to book

for us). We got some fine seats right in front of the kitchen and ordered Edamame, Banja Cauda (Which is obviously Italian, but what the hell), some Soba noodles, and some Yakitori skewers.

All were of a really nice standard. The vegetables served to dip in the banja cauda were all really fresh indeed. The meat in the yakitori was lovely and tender and the soba sauce for the noodles was warming and delicate.

The service was a little slow to be honest, but i guess with the business of the establishment it is a little understandable. The staff were really polite though, and as Gonpachi is open late it is a perfect place to visit after a few jars on the tiles.